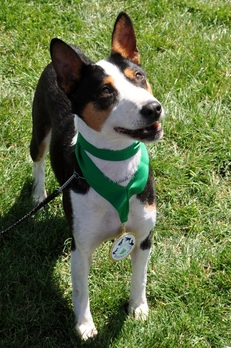 Louie, with whom life is never predictable
7/8/2006  Louie, the extraordinary Basenji, and I took our first Rally class today.  Call me an optimist, but I really thought we would do well.  After all, he had been through three obedience courses, passed his CGC and was well-trained in conformation and agility.

Our instructor set out a course, explained the signs, taught the humans how to maneuver through them and then, one by one, had us attempt it with our dogs so she could assess our level of competence.  A Malamute was first, heeled well and was attentive to trying to figure out what his flustered owner wanted.  A Vizsla was next, well-trained but a silly boy.  He and his owner easily completed the course with a few minor slip-ups. Next came the year-old Golden Retriever. Oh my, he and his owner worked in such perfect unison that it was beautiful to behold!

Louie and I were up next. The class was soon to be treated to a lesson in contrasts from what they’d just seen with the Golden. We walked up to the start line and I told Louie to sit. He stood, looked at the wall and became quite deaf. I repeated the command a bit louder, with his name included. “Louie, SIT!”  He looked around at the other dogs, as if to ask, “Which one of you is Louie?” The instructor had me push his rump down.  As she was asking the start question, “Are you ready?” to which I was to respond, “Yes”, Louie got tired and laid down.  We hadn’t even started the course yet and the other students were already snickering.

Using bait, I brought Lou back into the sit and we began.  By the time we were a few paces onto the course, Louie went into a trance, looking around everywhere but at me, unable to focus (even with bait) and seemingly unable to hear my voice.  At one point, I actually got him to heel for a few steps, but as soon as I turned to the right, he stopped in his tracks, stared straight ahead into space and generally appeared utterly confused by my disappearing act.  Next he became quite infatuated with the mats (the very mats he ignores in handling and agility classes) and grew absorbed in the need to sniff every step of the way.

We failed every station, but I saw a chance to shine toward the end.  At that station, Lou was supposed to stand and stay while I walked around him.  Mind you, we have done this exercise every week in conformation classes for most of his life and he is sheer perfection in his performance.  “Aha!” I thought,“Surely we will redeem ourselves now.” I managed to momentarily get Louie’s attention with a series of “Louie-Louie-LOUIE-LOUIE!!!”s and miracle of miracles, he briefly glanced at me.  I saw my chance and jumped in,“Stand Stay!” He looked away, so I repeated it again, “STAND STAY”.  Reluctantly and glumly, he plodded into a half-hearted stand and unrolled his tail. I started to walk around him and he decided to leave. I replaced him in the Stand and tried again. This time I actually got part of the way around before he wandered off to look at himself in the mirror.

The other students had each taken less than two minutes to complete the course.  After each finished, the instructor praised their performance and made comments about their great training and teamwork.  Louie and I finally finished after 12 minutes and as we walked off the course, the instructor gleefully declared, “Good for you, Marian! You sure stuck with it.”

Louie looked at her and yawned.  Oh dear, this could be a long eight weeks.

Marian (whose optimism stands corrected)
Louie (Obedience?  We did that once…long ago, when I was only a puppy and didn’t know better)

Update by the author:
After a few weeks wherein no progress was made, it became glaringly apparent that Louie had not the slightest inclination to perform Rally with me. Not even the finest treats or any amount of coaxing could cajole him into participating appropriately for more than a few seconds at best.  We had a long talk about this, but his decision was firm. We became Rally dropouts.  Sigh...